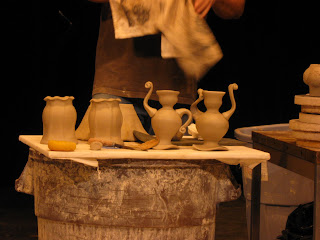 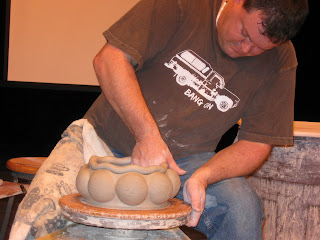 Last Friday we went to a workshop in Concord University in Athens WV
It turned out to be a very nice day for the drive.

Robert ‘Boomer’ Moore was the presenter. He also had a show in conjunction with the workshop. and it was split between his functional work and his sculptures.

He is an assistant professor at WVU and an avid tool maker, kiln builder and of course first and formost a potter.

His demonstration was informative, relaxed and fun he made Casseroles, mugs and candle holders.

After throwing on the wheel he pushed out then torched, pushed out and torched until he had these wonderful bubbles all around the form.

His pots are soft undulating and organic with a bit of whimsy to them, although they are not really meant for function yet they retain the ethics of functional pottery.

His sculptures are profound, made of multimedia; with glass, wood and metal besides pottery and yet retaining the whimsy that is obvious in all his work.

And so we came home wishing we had planned to stay for the whole workshop but one day was better than nothing,

I will make it a point to seek out another workshop by him, maybe a hands on.
Posted by Mayssan Shora Farra at 7:56 PM